We have carried out a systematic review of global risk sources using our five-step structured risk assessment approach. Part one of the review issued earlier covered the inflationary risk concerns. In this part two of the review, we focus on the risk of global government debt crises.

Investors concerned about the sustainability of government debt often quote the two major economic crises in the past two decades, when governments were forced to step in and maintain the continuity at the expense of long-term sustainability of government debt. The concern is not about the governments’ active stabilisation policies during the crises per se, but rather the subsequent lack of effort to cut down the debt level. In this line of thought, there are no structural economic policy issues, but only lack of political will to discipline government spending during the economic expansion.

We do find indeed that in terms of traditional fiscal sustainability metrics (budget surplus vs. stock of debt, growth and interest rates) the degree of concern should be higher than usual (Figure 1). However, contrary to the traditional interpretation of fiscal sustainability, our real concern is not that the major governments will become insolvent and the resulting economic chaos, but rather the likely round of fiscal austerity that would be triggered by debt levels that appear “frightening”. 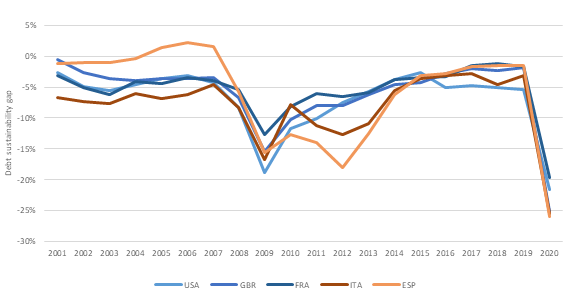 A round of austerity caused by the optics of high levels of debt could pose risk to economic growth rates and result in marginally lower interest rates. For a number of structural reasons though Mira ABM indicates that the impact on asset prices would be limited, while the balance sheet impact on pension funds would be driven by somewhat lower interest rates.

We regard the likelihood of the “debt Armageddon” as in collapse of trust in the major governments’ ability to honour their debt as sufficiently low (for reasons elaborated in this report) not to merit a Mira ABM scenario of its own.

Read more in our Risk Wire. Download the full document using the form below.