There are many geo-political consequences of BREXIT, including the eventual Irish border and the status of the UK post-exit, but the impact of BREXIT on institutional portfolios depends on more mundane trade arrangements.

To begin with, any UK exit that is accompanied by an amicable trade agreement will have virtually no impact on asset returns as any change in trade patterns will be marginal. We therefore have introduced two BREXIT scenarios that are both no-deal exits: 1) Hard BREXIT: revert to WTO rules and 2) Hard Brexit followed by the Euro break-up. The latter, strictly speaking, is not only BREXIT scenario, but one that may be triggered by BREXIT.

We apply price increases for cross-border trade in relevant industries (industries with meaningful trade volumes between UK and EU) commensurate with the WTO tariffs. Exiting EU means that EU will apply its WTO tariffs to the UK agricultural and non-agricultural exports: on the average 14.4% and 6.9% respectively.

We also apply volume declines, driven by the application of 14.4% and 6.9% tariffs to mutual imports of agricultural and non-agricultural goods respectively (based on elasticities of demand). For details of inputs, see Mira ABM. Mira ABM estimates the impact on profitability and prices globally and works out asset returns based on the estimates.

By far the greatest burden falls on UK-based importers of the EU-based components: 10.2% of their total cost is impacted. Chemical, petroleum and automotive industries will have the biggest issues, with between 24% and 30% of costs sourced from EU. UK-based exporters to the EU will suffer too, as 5.7% of their revenues originate from the EU.

Finally, EU-based companies that export to the UK will suffer, however the total impact there is very muted – at only 0.5% of revenues. Some industries and geographies are disproportionately exposed, of course: systemic exposure to the UK market exists in Ireland and Malta (on the average between 20% and 30% of all revenues). The widely quoted and politically charged automotive industry of Germany, for instance, is exposed at only 5.7% of revenues (assuming a 10-20% decline in UK sales this translates into only up to 1% impact on global revenues).

For impact analysis on your portfolio and asset class returns please check your MiraABM account or request a trial.

Scenario inputs are based on raising prices for all intra-EU trade between the large economies (Germany, UK, France, Italy, Netherlands) and volumes falling in-line with elasticities (see Mira ABM for detailed inputs). This scenario assumes that there is an orderly conversion of government debt into new local currencies and there is no loss of principal value (except any loss due to new appreciation/depreciation of local currencies). 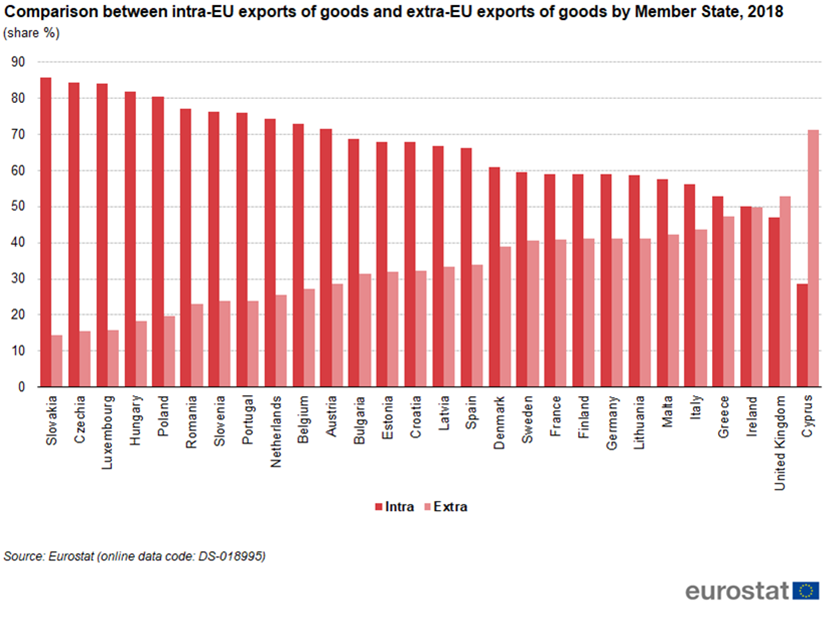