Why is The Scenario Risky?

The second largest economy in the world, with reported debt-to-GDP rate of 240% to 280% and a far greater ratio, if shadow banking is taken into account (source: Bloomberg, World Bank), must be a source for concern. More worryingly, the pace of debt build-up is among the fastest in the world: average annual credit growth rate of 20% between 2009 and 2015 was accompanies by GDP growth rate of only 6-7%. “Out of 43 economies where credit-to-GDP ratio increased by more than 30 percentage points within five years, 38 economies subsequently experienced severe disruptions, manifested in financial crises, growth slowdowns, or both.” China’s credit-to-GDP ratio increased by nearly 50%. As long-term risks are too high to bear in the corporate debt market, companies are resorting to short-term funding. The average weight of debt maturing in less than 12 months in total debt among 1020 largest state-owned enterprises (SOEs) is at 66%.

Where Does the Risk Come From?

Debt is not just a result of overly ambitious growth appetite; China’s SOEs have been operating at economic losses for decades – losses that had to be financed somehow.Average Returns on Capital (ROCs) at state-owned enterprises are at 4.5 %. Real market cost of capital is a weighted average of 4-6% on wealth management product yields (the “unregulated level of return”) and cost of equity of 8-10%, i.e. the real cost of funds is near 8%. This means on a $100 investment an average Chinese SOE makes $4-6 and pays $8 as interest, generating a loss of $2-4. Increasing volumes of investment only increase the losses and debt. Only 1 out of 17 SOEs in the CSI index earns more than 8% on capital invested. Cutting investment is not an option due to the political fallback – resulting unemployment and social unrest will be difficult to handle.

The Not So Obvious

Large part of key industries’ balance sheets are supported by property and infrastructure prices. Property prices are supported by more credit. If this demand wanes, balance sheets of companies will look even worse than they are now. Balance sheets of banks are funded by the off-balance-sheet Wealth Management Products (WMPs) – investment instruments sold to clients with implicit guarantee by the bank. Money raised is then used to buy (among other investments) corporate bonds, proceeds of which are used to pay back balance-sheet debt. The mechanism moves debt off the banks’ balance sheets.

Most debt is accumulated in Local Government Finance Vehicles (LGFV’s) and SOE’s, in turn held by banks and structured in WMPs. SOE’s ability to maintain certain level of interest payment is key, which in turn depends on their profitability.Actual interest paid is a bad measure: debt is often rolled over with interest payments capitalized. Many SOEs in reality do not pay interest because they cannot afford to. To determine the industries that are likely to collapse first, we use ROC and size cut-offs. We focus on the least profitable and largest SOEs in China. The scenario assumes a decline in revenues (driven by volumes) of between 10% and 30% – proportional to ROCs and consistent with historical recessions. 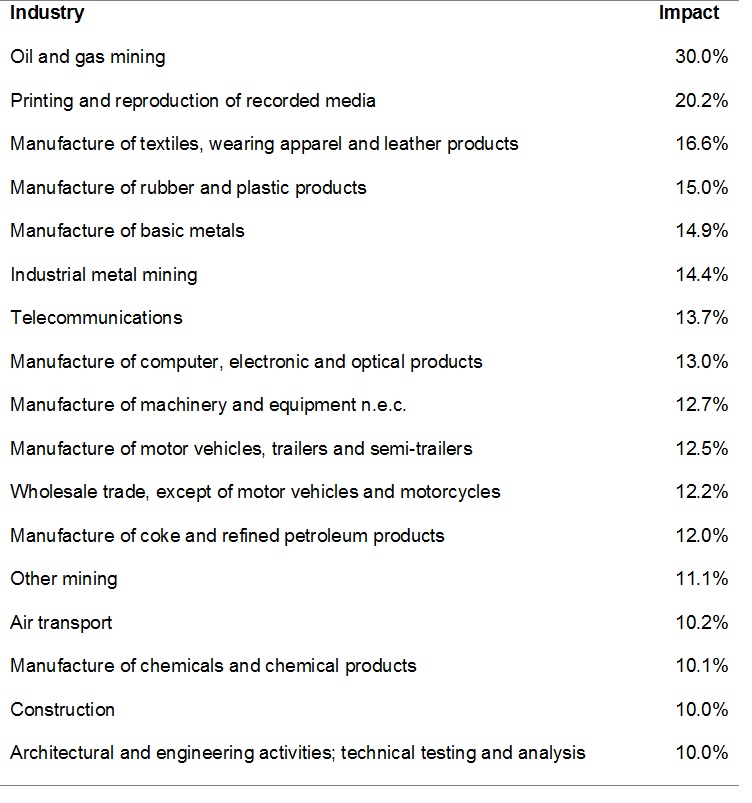 Worst impacted assets are industrial metals at over 70% downside, followed by equities in Europe at nearly 16%. 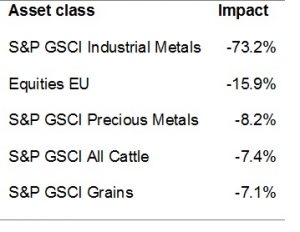 Clearly, US Treasuries are a safe asset to hold in such an event; even though China holds significant reserves of US Treasuries, the demand for Treasuries in this scenario will outweigh the selling pressure from China. A more aggressive hedge against the scenario is a position in electronics and semiconductors manufacturers in Taiwan and Korea. Based on the supply chain analysis LINKS Mira indicates a strong negative relationship between the heavy industries that are part of the weak SEO scenario and advanced electronics and semiconductors: the resulting lower prices for industrial and precious metals are positive for electronics, while the Chinese and global demand for electronics will fall to a lesser extent. 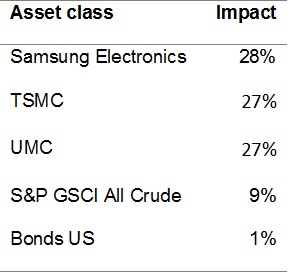 Financial risk resides in the bond market, which is observable. The intensity indicator is based on weekly change in yields of three indices representing industrial, interbank and construction markets, with a high risk intensity corresponding with 100 basis point shift in yields in a week – a significant stress in a system. 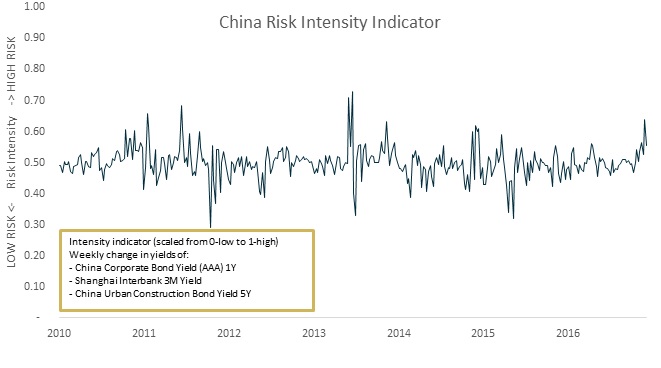 Explore how Agent-Based Models (ABMs) can be used to run stress tests and scenario analyses.
Request